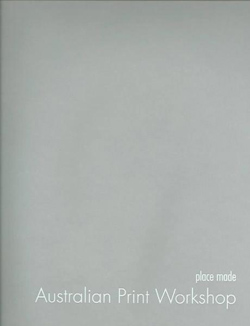 This book celebrates the work produced at the Australian Print Workshop between 1981 to 2002. It is a snapshot of the involvement of Australian artists in the production of prints and their concerns stylistically, politically and technical during these two decades.

Over the last 20 years over a thousand artists have used the facilities of the Australian Print Workshop. Its skilled staff, technical excellence and innovative approach to printmaking have made the studio the favoured workshop for artists.

Established in north Melbourne in 1981, the workshop has been situated in inner-city Gertrude St., Fitzroy since 198 . Here under the directors John Loane, Neil Emerson and presently Anne Virgo, the workshop has flourished. The workshop is inclusive and artists embracing all styles of work, from realistic portraits to pixilated abstractions, are all welcomed. There is no “house style” at the workshop and the prints produced in etching, lithography and other techniques reflect the ambitions of the artist. Some are already skilled in printmaking techniques while others are guided by the expertise of the workshops senior printers like Martin King.

In 2002 the National Gallery of Australia acquired the workshops archive 2, a collection of over 3000 prints by artists Australia wide. The acquisition was purchased was made possible through the assistance of the Gordon Darling Australasian Print Fund.