My head is a map 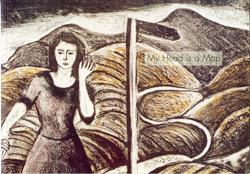 During the period 1982-92 the National Gallery of Australia acquired over 1400 items for the print collection through the Gordon Darling Australasian Print Fund. These ranged from small, traditional, delicately worked etchings to large mural-sized multi-plate prints in which the plates have been marked with an electric grinder. Also acquired were works produced by lithography and screenprinting as well as newer processes such as electrostatic prints and computer-generated images.

Prints from all states and territories in Australia were represented in acquisitions, as were the near neighbouring countries of Aotearoa New Zealand, Papua New Guinea and Western Samoa in the Australasian region. My Head is a Map was not a publication and exhibition of 'printmaking now' but rather a survey of work produced during the years 1982-1992. In formulating the book and exhibition it was decided not to attempt to include works by all the artists who had produced significant prints during the decade (it would have been an impossible task). Instead thematic groups of works by a small number of artists producing prints were selected relating to a recurring theme in recent Australian art - location in its many manifestations.